Yao Chen is not only a superstar, but she also has  an activist streak. Yao Chen is our Sophisticated Diva of the week. Mrs. Chen is well known for her romantic comedies in China,but she just could not keep her mouth silent about the social and environmental issues in her country.

END_OF_DOCUMENT_TOKEN_TO_BE_REPLACED 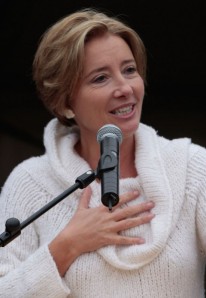 You might only see an actress, but Emma Thompson passion goes beyond the screen…

Emma Thompson’s philanthropic work goes beyond her acting and screenwriting. Born in England 1959. Thompson is well known for her role in Nanny McPhee. She won an Oscar for both acting and screenwriting. Thompson passion and support goes towards Human Rights organization. She supports ant-poverty agency ActionAid, is the chair of human rights organization. The Helen Bamber Foundation, and had been raising awareness of sex trafficking for years. “Sex trafficking is a hugely important subject, and I believe we need as much art as we can to get to help people understand what’s going on.” Thompson works as a patron for a Refugee Council and has spent many years campaigning for immigrants’ rights.

“If you wish to experience peace, provide peace for another.”~ Tenzin Gyasto, The 14th Dalai Lama

Our Sophisticated Diva this week is a young Woman by the name of Somy Ali. Born in Karachi, Pakistan, this actress, model, Human rights advocate, free lance journalist and documentary film maker goes unheard of by many but continues to work relentlessly to help shed light as well as help domestic violence victims through direct services and influential policy.

On March 25th Somy Ali was born and raised in Karachi until the tender age of seven. Then was moved to Fort Lauderdale, Florida to Start a new life with her mother and younger brother. In 1992, at the age of 16 Somy relocated to Mumbai, India to purse modeling as well as becoming an actress in Hindi films. In 1999 Somy moved back to America and obtain a Bachelors degree in psychology, graduated with a degree in film making and also obtained a degree in broadcast journalism. She completed three short films on Abortion, teenage suicide and Domestic Violence.

Ms. Ali is the founder and president of a nonprofit organization by the name of No more tears’ which mission is to empower people to live safe, hopeful and happy lives. But more so aids to help immigrant women who suffer from domestic violence and abuse.

To learn More about Somy Ali and the No More Tears Project. To Make a Pledge and Save a Life Click the link below